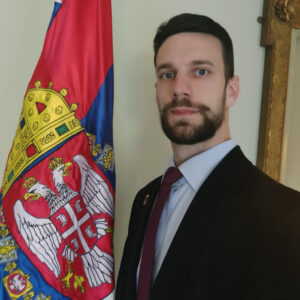 Miloš Pavković, LLM, was born on March 10th, 1986, in Belgrade, to a monarchist family.

He is a descendant of a civil engineer and infantry reserve major Pavle Jovanović, a recipient of virtually all royal decorations, among them the Order of Karađorđe’s Star with Swords, awarded in recognition and commendation of services rendered to the King and Homeland. He is also descended from royal air force captain and aviator Nikola Pavković, who served as aide-de-camp to the chief of staff of the Royal Air Force of the Kingdom of Yugoslavia.

He obtained primary education at the „Stjepan Stevo Filipović“ elementary school, with excellent grades and as valedictorian. He completed his secondary education at the First Belgrade Gymnasium. After high school, he enrolled in the Faculty of Law of the University of Belgrade, graduating in 2013, and obtaining a master’s degree in law in 2016.

He is employed as an associate at the Vladimir V. Homan law firm in Belgrade, as a legal advisor of the CEO of „FTO BEZBEDNOST“ Ltd. in Belgrade and as lecturer at the „Zaharije Stefanović Orfelin“ high school in Belgrade, where he teaches multiple legal subjects.

At the age of 18, he started volunteering, and in February 15th, 2004, he joined and actively supported the activities of the Cabinet of HRH Crown Prince Alexander, as well as the activities of HRH Princess Katarina’s humanitarian foundation.

He was a founding member of the Society of Monarchists of Belgrade in 2005, and in 2010 he joined the Kingdom of Serbia Association.

At the Electoral Assembly in 2019 he was elected member of the Board of Management, and in 2020 he was appointed General Secretary of the Association.

He has actively participated in all events organized by the Association from 2010 to this day.