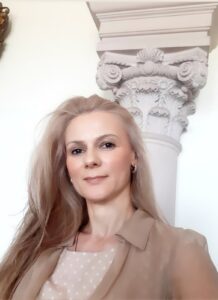 Sanja Spasenic – was born in 1971 in Belgrade. After graduating the XIII Belgrade Gymnasium she continued studies at the Faculty of Philology, University of Belgrade and successfully graduated, obtaining the title of Professor of Russian language and literature.

She begins her professional career in the first democratic Government of Serbia in 2001 as a Media advisor at the Ministry of Urban Planning and Construction and as Chief of Stuff in the Ministry of Transport and Telecommunication as well as a consultant in the EU department.

She succesffully graduated master studies at the Faculty of Political Sciencees in Belgrade (International Relations, Regional studies of the USA) and in 2017 succesffully defended her master thesis on the topic of „Attitude of the USA towards the Trial of General Draguljb Mihailovic.“

She has been a member of the Association “In the Name of the People for a Free Serbia”, which follows and respects the recommendations of Council of Europe Resolution 1481 of January 2006 on the need for international condemnation of crimes committed by the totalitarian communist regimes, as well as the April 2009 resolution and the Prague Declaration on European Conscience and Communism in June 2008, calling for “European condemnation and education about the crimes of communism.”

She is involved in the activities of the association, including an exhibition on the victims of the communist regime in Serbia and the erection of a monument to the victims of communist terror in Belgrade after September 1944.

She actively supports the work of the Association of the Kingdom of Serbia since its founding. She lives in Belgrade and has a son Stefan.