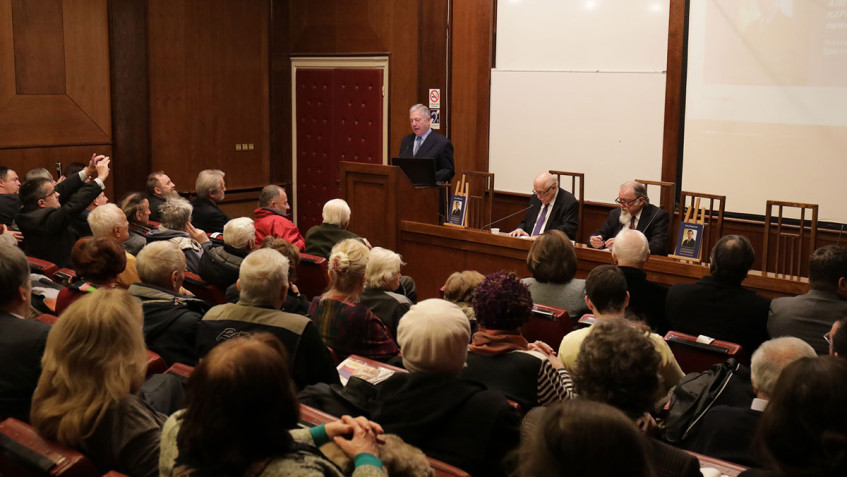 The book “Alexander II Karadjordjevic – Contributions for Biography” by Prof. Dr. Nikola Moravcevic, member of the Crown Council, was presented to the public in the presence of HRH Crown Prince Alexander and Crown Princess Katherine at the Foundation of Ilija M. Kolarac. Representatives of the Kingdom of Serbia Association were also present.

“I am very grateful to my long-time friend and adviser, Nikola Moravcevic, for his efforts and the will to deal with my biography. A man rightly believes that he is well aware of himself and that he is a reliable witness of his own life. However, to face up to how the others see you and how they testify about what you did or what you missed to do, is not an easy challenge. Nikola Moravcevic has a long experience behind him as a participant, observer and witness of the turbulent times through which we passed, and we are still passing. As the author of many books, scientific studies and a man with a rich history as a university professor, he has the methodology and the admirable storytelling skill. I, as a non-objective participant and an observer of my own life, can only say the following: his book arouses and revives memories that are both costly and painful. Still, I would not give up either! Thank you Nikola! If there were no people like you, history would have been written by hatred and ignorance. With you, hate and ignorance have no chance!”, said Crown Prince Alexander in his addressing.

Besides the author, Prof. Dr. Moravcevic, the audience was addressed by Mr. Dragomir Acovic, Chairman of the Advisory Bodies of the Crown, and the book presentation was also attended by the other advisors of the Crown – Academician Matija Beckovic, Mr. Predrag Markovic and Mr. Ljubodrag Grujic.

Nikola B. Moravcevic (Zagreb, 1935), is an author of historical novels and a literary historian. After graduating from the Academy of Theater Arts of the Belgrade University (1955), he went to America, where he graduated at the theater department of the Art Institute in Chicago (1961) and received a PhD from the Wisconsin’s University of Medford (1964). After two years at the Stevens College, Missouri, he moved to the Department of World Literature at the University of Illinois, Chicago, where he was promoted to an associate professor in 1968, and in 1971 as a full-time professor. At the same University he was in charge of administrative duties as the founder and head of the Slavic department (1968-1981), and then as the vice-chancellor of the University and the director of the University Development Board (1981-1988). His scientific work includes more than 200 literary essays and critical presentations in the field of Russian and Serbian literature, printed in ten collections of essays in several leading encyclopedias and in a number of well-known literary journals in the United States and Canada. He won the “Rastko Petrović” Prize for Lifetime Achievement (Belgrade, 2011) and the “Janko Veselinovic” Prize for the best historical novel in Serbian (“Count Sava Vladislavic”, Belgrade, 2016). He is a member of several American and international professional associations and an honorary PhD of Wrocław University in Poland. He was the founder and for fifteen years (1980-1994) editor-in-chief of the only scientific journal in the United States dedicated to Serbian Culture, “Serbian Studies”.