First Congress of Kingdom of Serbia 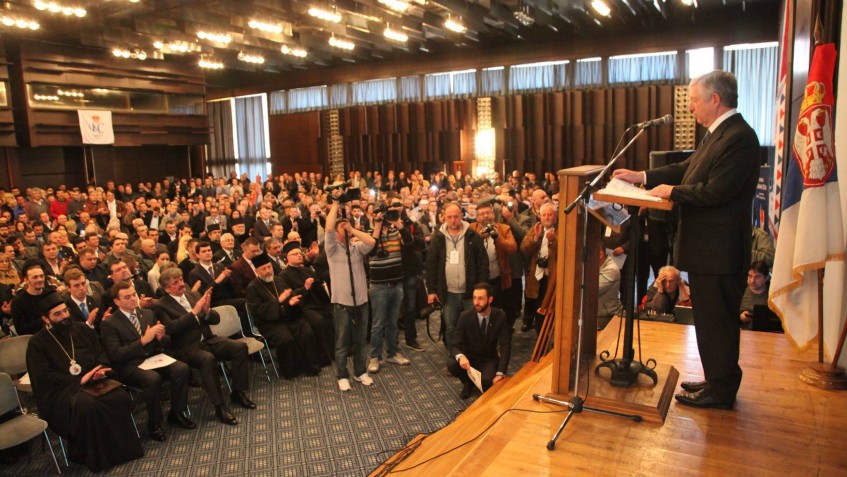 On March 27th, 2016, the Queen of Serbian spa, Vrnjacka Banja, was the place where the Kingdom of Serbia Association held its first congress and an Academy for the 75 Anniversary of HM King Peter II assuming full Royal duties, in the presence of more than 1,000 guests! The Kingdom of Serbia Association adopted a Declaration for restitution of Parliamentary Monarchy and amending of the Constitution suggested by former Speaker of the House Mr. Predrag Markovic.

Congress and the Academy, held with blessings of His Holiness Patriarch Irinej of Serbia, were attended by Their Royal Highnesses Crown Prince Alexander and Crown Princess Katherine, His Grace Bishop Arsenije of Toplica, Vicar Bishop of His Holiness Patriarch Irinej of Serbia, Mr. Predrag Markovic, member of the Crown Council, Mr. Rados Bajic, director, actor and screenwriter, Mr. Boban Djordjevic, President of the Municipality of Vrnjacka Banja, numerous representatives of cultural and public life and members of Kingdom of Serbia Association.

After the original (Monarchist) National Anthem “God of Justice” His Royal Highness Crown Prince Alexander, son of His Majesty King Peter II, who was declared of age on this date 75 years ago, addressed the participants.

Crown Prince Alexander said this was very personal jubilee for him, reminding that his father King Peter II was not even 18 years old at that time, adding that burden on his shoulders was too great for much stronger states and much more experienced rulers.

His Royal Highness said he wasn’t sure that we fully understand today severity and tragedy of these times, but that we must know that history repeats itself if we do not learn from it, and that we could learn only if we knew the truth. Crown Prince reminded that truth about March 27 was hidden for decades.

“We are here today because we believe that honor and pride can be restored. That we owe that to our country and our ancestors. We can learn a lot from times when our ancestors lived and sacrificed. That jubilees stand for. To remind us, but also to oblige us to what we have to preserve and what to rebuild. I believe in your strong faith! I believe in Serbia!” — emphasized Crown Prince Alexander and declared that his was awarding the Kingdom of Serbia Association with the Saint Sava Order of Second Degree for their services to the Royal House, for national and general merits, and that it was exactly this Association trade mark.

His Grace Bishop Arsenije of Toplica, Vicar Bishop of His Holiness Patriarch Irinej of Serbia addressed the gathering and reminded of undivided support that Serbian Orthodox Church and Patriarch Irinej give to Crown Prince Alexander and the Royal House and idea of restoration of Monarchy in Serbia.

The representative of His Grace Bishop Andrej of Austria and Switzerland also addressed the gathering.

In the artistic part of the program, our famous actor Mr. Ivan Vuckovic magnificently performed monologue from the play “St. George kills dragon” and artistically red the defense of major of Yugoslav army in the Fatherland, Milic Rausavljevic Raus, spoken on the communistic court.

After that a letter was read from academician Matija Beckovic, who was scheduled to speak at the Congress, but at the last moment he was prevented: “On this day in 1941, King Peter II was proclaimed an adult. The King entered the war as the most famous, and ended it as the most tragic European king. His return to the country was banned, his property confiscated, he was stripped of his citizenship. The Republic of Serbia has no other history except the history of the Communist Party. It is ominous that this history still extends and that Serbia’s head remains uncovered as if it did not have the crown. Serbia is a kingdom, and Serbian nation is a nation of a king!” – said Mr. Beckovic in his letter.

The long hidden videos about the demonstrations of 27 March 1941 that were broadcasted in this century for the first time were shown, with testimonies of participants of events who were not monarchists. Mr. Uros Parezanovic, General Secretary of the Executive Board of KS Association, prepared the video using movies “Truth about March 27th”, “Yugoslavia in war 1941 – 1945” and archive videos from Yugoslav Cinematheque.

Also, clips from the film “For the King and the Country” directed by Rados Bajic were also displayed, and Mr. Bajic gave a very inspirational speech.

Bajic spoke about his great grandfather Oren who gave his life for the King and the Country during defense of Belgrade, his grandfather Mirko who was in the Army in Belgrade and had the honor to meet twice with King Alexander I and who was arrested three times after the World War Two by the communists because of his loyalty to the Crown. About his father Milos who taught his children and grandchildren about the love for King and the Homeland. He added that he was very honored by the Order of Crown given to him for his work by Crown Prince Alexander, and that he was sure that his ancestors were very proud of the friendship and respect he built with the Crown Prince over the previous years.

“Ladies and gentlemen, we have chosen this date, March 27, as a reminder what happens when ideologies, in the whirlpool of foreign powers interests hid and abuse historical facts… when a state which loses its essence, doesn’t listen to the voice of people, could lose itself and its people in decades to come. And he added: “This date is right in the middle of the political campaign. But the Kingdom of Serbia Association is coming together about values much more important than any political elections. This Association was created by young people who gained knowledge and experience and learned by their mistakes. Young people that were ready and still are, to follow advice of the more experienced ones, in order to realize their goals. Maybe we do not have enough people or funds, but we are ready to initialize an action that will bring people together. I sincerely believe that we have the most important — we have faith!”, said the President of Kingdom of Serbia Mr. Mario Majstorovic.

He invited Mr. Predrag Markovic, former Speaker of the House and member of the Crown Council, a man who signed the current Constitution of Serbia, decree of Serbia independence and Decree of re-institution of current Serbian Coat of Arms, flag and national Anthem to address the gathering.

Mr. Markovic emphasized he was not a member of Kingdom of Serbia (but that he is member in his hearth) and he is not in politics any more, but stressed that Serbia today “has a political class, but has no political elite. A person cannot choose the time to live in, but can choose what he or she will do with its time for himself, his family, for his country”.

He urged members of the Kingdom of Serbia to gather around “The changing of the Constitution that will establish democracy in Serbia as Parliamentary Monarchy, that will strengthen institutions that would guarantee true democracy and ban any personal or partisan usurpation of power,” and in that way to finish the process of “coronation of democracy”.

Markovic invited members of the Kingdom of Serbia to adopt a declaration that consists of one year activity plan for changing the Constitution in the process of restoration of Constitutional Parliamentary Monarchy in Serbia.

In the text it was emphasized that King is not entitled to power in the parliamentary Monarchy. It gives constitutional guarantees and enables the King to protect people from authorities. To direct public authorities to do public functions and protect public interests. It is also written in the text: “The authorities have to be faceless, and the state must have a face. Crown from the flag, and the Crown from the Coat of Arms that represent the country, that the Crown must be on a head to avoid that our state is being beheaded. When it was on a head from the House of Karadjordjevic, Serbia has won wars, Serbia has expanded its territories and united countries and citizens; in peace time, people moved into Serbia, and those who went abroad for education have come back.

Political parties should compete for executive power that is transient and democracy should have institutions that guarantee durability and job security and security of the state, and must be headed by someone not changed after the elections”.

Members of the Kingdom of Serbia Association accepted by acclamation the text of the declaration!