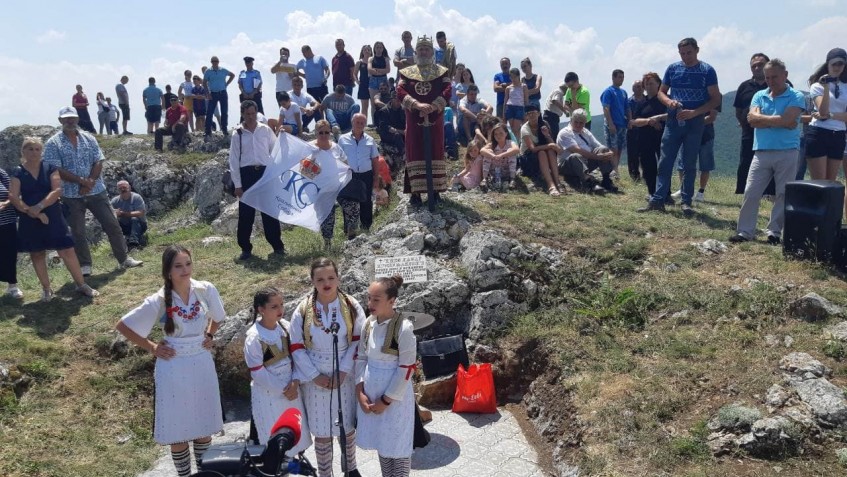 Members of the Kingdom of Serbia Association, as they did also on previous years, were оn Vidovdan, a great Serbian holiday, with our people in Kosovo.

On Friday, June 28, at Vidovdan, members of our Association attended the ceremonies on the occasion of the Day of the Municipality of Ranilug in Kosovo and Metohija. They were at the Liturgy at the Temple of the Holy Archangel Michael in Veliko Ropotovo, and then they took part in the procession through the city.

The great honor to our delegation was the presence to the ceremonial session of the Municipal Assembly of Ranilug, where Vice President of the Managing Board, Mr. Andrija Šošić greeted all the guests on behalf of the Association.

After that, our members with our hosts visited Prilepac, the birthplace of Prince Lazar, where our member, Mr. Miroslav Smrzlić, cut the Slava bread with the clergy.

In the evening, the delegation of the Kingdom of Serbia Association and other distinguished guests attended the Vidovdan central festivity in Kosovsko Pomoravlje – the 19th cultural and sports manifestation called “Vidovdan ceremony”, at the sports field of the “Trajko Perić” primary school in Veliko Ropotovo.

During the ceremony, Mr. Andrija Šošić, as a special envoy, read the letter from HRH Crown Prince Alexander addressed to the citizens of Kosovsko Pomoravlje.

Earlier in the day, during the visit to Draganac Monastery, the President of the Executive Board Mr. Predrag Medenica handed the personal gift of His Royal Highness Crown Prince Alexander to the monastery, with the message that all Serbian people in Kosovo and Metohija are daily in the thoughts and prayers of all members of the Royal Family Karadjordjevic.

The organizer of the trip was Mr. Dragan Božić, President of the City Committee of the Kingdom of Serbia Association in Sremska Mitrovica.

Kingdom of Serbia Association especially thanks the City of Sremska Mitrovica for the support for this trip to Kosovo and Metohija.