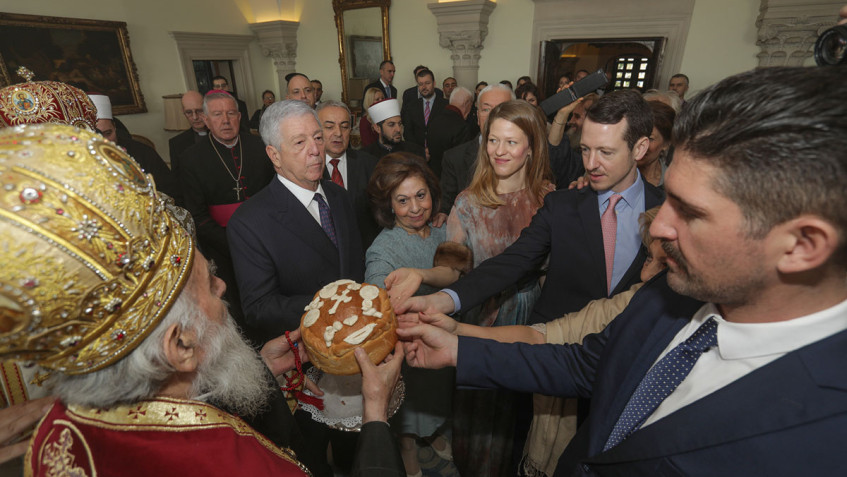 Their Royal family of Serbia celebrated the Patron Saint Day – St. Andrew the First-Called, at the Royal Palace in Belgrade on December 13th, 2018. Mr Mario Majstorovic, President of the Kingdom of Serbia Association was guest at the reception, members of the management attended the cutting of the slava bread, and Members of the Association helped the office of the Royal Palace in the organization and the realization of this solemnity.

Delegation of the Association presented a gift to Their Royal Highnessess Prince Philip and Princes Danica for the baptism of Prince Stefan – the traditional Serbian national clothes.

The hosts are Their Royal Highnesses Crown Prince Alexander and Crown Princess Katherine, together with their family – TRH Prince Philip, Princess Danica, Prince Stefan and Prince Alexander, and the celebration at the Palace was attended by the religious leaders, members of the Advisory Bodies of the Crown, as well as by the friends of the Royal Family.

“His Holiness Patriarch Irinej, this year again, has honored us by officiating at the Royal Chapel on the day of our Patron Saint, Saint Andrew the First-Called. Thank you for that, Your Holiness. On the day of our Slava, we Serbs always remember what happened in the previous year. What brought us most happiness was the birth of our grandson Stefan. We look forward to his entry into orthodoxy, his christening. Prince Stefan is the seventh generation of Karadjordje’s descendants, and I am immensely happy that our family has rejuvenated. The young shall inherit the world, and it is up to us to do everything to leave them the legacy of peace and harmony. To all of you here, and to all citizens of Serbia, I wish good health, to have faith, patience and wisdom”, said HRH Crown Prince Alexander.

On this occasion, Archimandrite Metodije, prior of the Hilandar monastery, donated to the Royal Family three authentic crosses, made of the Hilandar olive tree, of the shell from the Ohrid Lake and of silver. All three were consecrated on the piece of the Holy Cross on which Jesus Christ was crucified, which Saint Sava had brought to Hilandar from Nicea eight centuries ago. One of the crosses is dedicated to the forthcoming christening of HRH Prince Philip, and the other two for the future members of the Royal Family.

The Royal family is looking forward to Prince Stefan’s christening on Saturday 15 December, also at the Royal Chapel of St. Andrew the First-Called.