Members of the Belgrade City Board of Kingdom of Serbia Association attended on May 31st, 2015 the manifestation named Sports Gathering of Saint Serbia, where they accompanied Their Royal Highnesses Crown Prince Alexander and Crown Princess Catherine.

Under the auspices of His Holiness Patriarch Irinej of Serbia, the Second Sports Gathering of Saint Serbia took place at Ada Ciganlija today. Their Royal Highnesses Crown Prince Alexander and Crown Princess Katherine, together with Mrs. Betty Roumeliotis, Crown Princess Katherine’s sister, attended this morning a Holy Liturgy officiated by His Grace Bishop Irinej of Australia and New Zealand with the clergy of Belgrade and Karlovac Diocese.

Their Royal Highnesses attended a very interesting cultural and artistic program after the Liturgy together with Bishop Irinej, Mr. Goran Vesic, the City Manager of Belgrade, Mr. Marko Djuric, Head of the Office for Kosovo and Metohija, Mr. Mileta Radojevic, Head of the Office for Cooperation with churches and religious communities, and Mr. Dejan Tomasevic, our famous basketball player who is the president of the Association.

There were parachute jumps and Military Special Forces exercise, and after that children showed their sports skills at more than 30 playgrounds in different sports, with the assistance of professional coaches.

Several thousand children took part in different sports activities. At the end the film crew of “We will be World Champions” played a basketball game against Saint Serbia team led by Dejan Tomasevic, Zarko Paspalj and many other Serbian famous former basketball players.

The youngest participants received special gifts, and all attendees could taste cooked beans prepared military style. All those activities were free of charge.

You can see the entire picture gallery on our Facebook page: https://goo.gl/NMdu9V 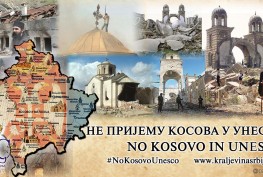