Delegation of the Association visited Hilandar 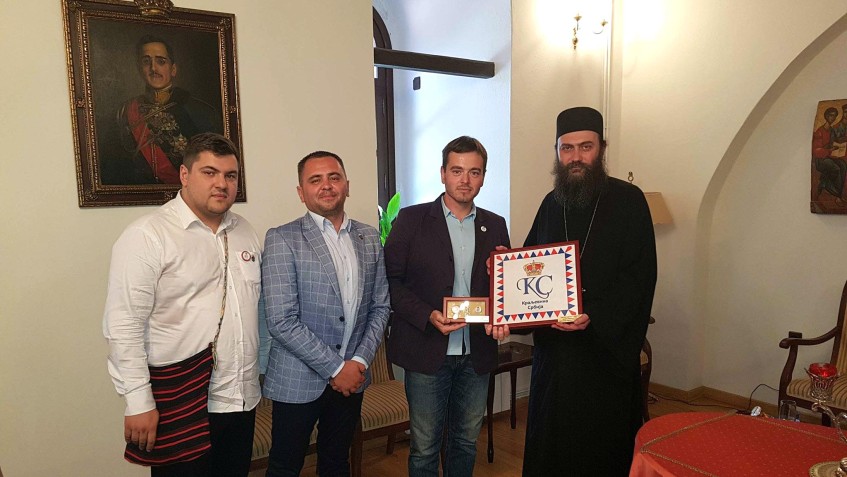 With the blessing and at the invitation of the father Metodije, the prior of the Hilandar monastery on the Holy Mount Athos, the Delegation of the Kingdom of Serbia Association visited last week this sacred place last week and spent three days there.

Members of the delegation were: the President of the Association Mr. Mario Majstorović, Vice-President Mr. Saša Šušić and member of the Managing Board Mr. Andrija Šošić.

In a friendly conversation we felt the great respect of Father Metodije for the Royal family Karadjordjevic and their work, as well as full support for the work and activities of the Kingdom of Serbia Association. He spoke to us about the very nice impressions he got about HRH Crown Prince Alexander during his visit to Hilandar immediately after a severe fire and said that it is very important that he respected the old royal custom of planting olive tree on his first visit. In addition to Emperor Stefan Dusan’s tree, there are also olives planted by HM King Alexander Obrenović, HM King Peter I and HRH Crown Prince Alexander.

In the central part of the reception room there are portraits of HM King Alexander I and HM King Peter II. In the Hilandar monastery, there is a great respect for all the rulers who led the Serbian people in difficult times and never forgot the importance of the history, tradition and cultural heritage of their people, helping and implementing part of themselves into the eternal building of the Hilandar.

The delegation gave present to Father Metodije – the flag of the Kingdom of Serbia Association and badges with the emblem of Crown Prince Alexander and this year’s logo of the association, which was made in honor of the 800th anniversary of the crowning of Stefan the First-crowned, with the inscription: “To Holy Serbian Imperial Monastery Hilandar – Kingdom of Serbia Association “. With this act, the existence and work of our Association will always be part of this oldest and largest sanctity of our people.

Our delegation presented the annual and five-year plan of the Association’s activities to father Metodije, and he expressed his willingness to support and participate in certain events in front of the Hilandar Monastery, which is an outstanding honor for the Association and shows the respect for our work.

The delegation took this opportunity to visit the Serbian Military Cemetery in Thessaloniki where they delivered modest gifts to the guard of the cemetery, Djordje Mihajlović, and informed him about important events and news in the Royal House and Association in the following period. We were pleased to see that Djordje is in good health and very active, as we are accustomed to.