Kingdom of Serbia Association’s City Committee Krusevac in cooperation with the Public library Krusevac organized a lecture called “Albanian Golgotha – 100 years later” as part of the series of lectures called “The monarchist stories”. The lecture was held on December 23rd, 2015 in reading room of Krusevac Public library.

The speakers are members of the City Committee of the Association, history professors, Messrs. Konstantin Dobrota and Milan Milosevic.

The evening started with a welcome speech by the Committee’s PR, Miss Marija Bogicevic, and president of Krusevac’s Board, Mr. Ivan Petrovic also addressed the audience, as well as the director of the Library, Mrs. Snezana Nenezic.

The lecture was opened by prof. Milan Milosevic’s touching speech about the fateful decision of the Serbian Supreme Command to begin the withdrawal through Albania and Montenegro, about various situations that occurred during the withdrawal and about the way that the allies treated the Serbian army when it arrived at the Albanian coast. He ended his speech with two interesting stories from the WW1 – about “King Peter I socks” and about Momcilo Gavric, the youngest soldier of the Great War.

Prof. Konstantin Dobrota spoke about the suffering of Serbian people during the nineteenth and twentieth century, as well as the attitude of the powerful countries towards the Yugoslav idea, which was given in the “Nis Declaration” of the Serbian Government.

The lecture was covered by the media – Regional Radio-Television Krusevac, and a story about the lecture was broadcasted in the News. 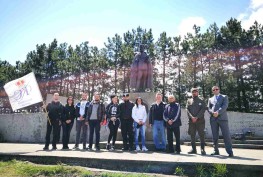 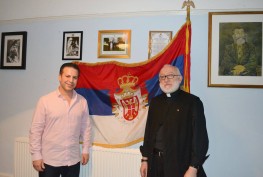 Meeting of the Association’s Trustee in England