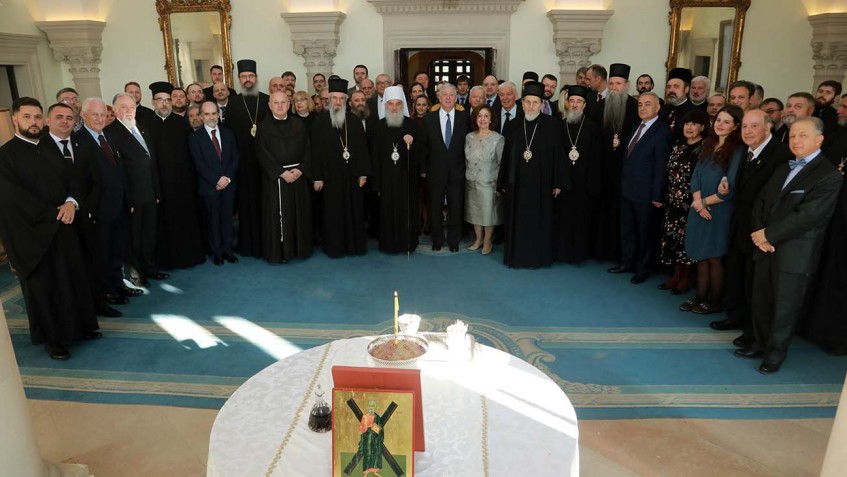 Their Royal Highnesses Crown Prince Alexander and Crown Princess Katherine celebrated today the Patron Saint Day (ser. “Slava”) of the Royal Family – St. Andrew the First-Called, at the Royal Palace in Belgrade. Members of the management of the Kingdom of Serbia Association were guests at the reception, and our volunteers assisted in the organization of the event.

His Holiness Serbian Patriarch Irinej officiated the Holy Liturgy at the Royal Chapel of St. Andrew the First Called, with the help of Belgrade Archdiocese priests. Following the liturgy, the act of cutting the Slava bread at the Royal Palace’s Blue Salon was also officiated by His Holiness Irinej and His Grace Lavrentije, Bishop of Sabac.

The Holy Liturgy and a lunch at the Palace were also attended by Bishops Jovan of Sumadija, Joanikije of Budimlje-Niksic, Atanasije of Mileseva and Vicar Bishop of Jegar Isihije, Hilandar Monastery Archimandrite Metodije, as well as the Roman Catholic Archbishop of Belgrade’s envoy, Fr. Leopold Rohmes, Crown Advisers and friends of the Royal Family. The President of the Association, Mr. Sasa Susic, members of the Managing Board, Mr. Andrija Sosic, Vice-President of KS and Uros Parezanovic, General Secretary, and Mr. Bojan Starcevic, member of the Advisory Body of the Assocaition, were guests at this lunch. 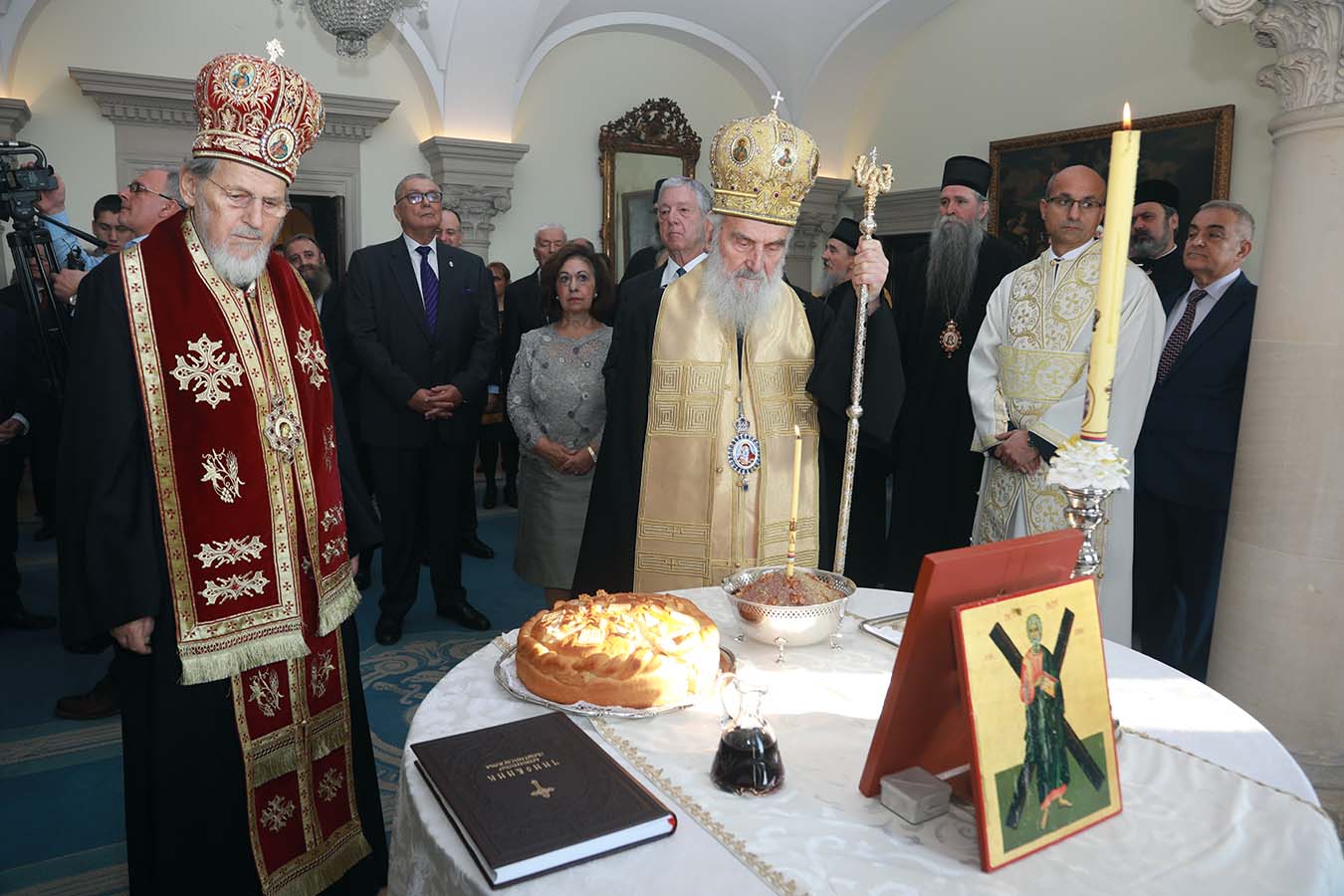 HRH Crown Prince Alexander thanked the Patriarch and, in his speech, pointed out: “Patron Saint’s Day is a family holiday, it is a celebration of the family’s unity and its rallying around its Patron Saint. The Holy Apostle Andrew the First Called is the Patron Saint of my family. All those who are here today and all those who are far away are in my heart. No one needs to live only for today and only for themselves and their own. We will overcome all temptations and we will not fail our ancestors or descendants if we are united as a nation. I wish you to spend this good day and all the days to come in peace, health and well-being”.

His Holiness Patriarch Irinej of Serbia addressed the present, saying: “Today we celebrate the Patron Saint’s Day of our glorious dynasty. We have a dynasty we are proud of. A dynasty that originated from the people and whose main and primary concern is the care of the people. A dynasty that has a big role in the history and culture of Serbia. Few such dynasties exist in the world. Unfortunately, time and opportunity took their toll. We are devoid of that dynasty today, but your presence here in this Palace means a great deal to our people. In you, Your Royal Highness, the Serbian people see all the Karadjordjevics, from Karadjordje to you. You are the glory and pride of this people. Time brings a lot, but a lot of problems, too. We live in the hope that the time will come to ask the question of the Serbian people’s leader once again. “For the King and Fatherland” was the oath of our soldiers, that is now our history, the current situation is as it is, but we hope that the importance of the Karadjordjevic dynasty will not end for our people. We speak of Karadjordje, King Peter and King Alexander as a part of our national being. We have to get back to that history as a nation, unfortunately today we have come a long way from that. May the Lord bless the present generation of the Royal Dynasty. May this day be a happy one and a happy Slava to the Karadjordjevic family. I wish you all the best, may the Lord bless you, and through you all of us”.

In the evening, two Slava receptions were held at the White Palace, that were be attended by representatives of the government, the diplomatic corp, members of the Privy Council, the Crown Council and the Crown Cabinet, mayors, academicians, representatives of the Ministries and Army, monarchist associations, international organizations, national and international non-government organizations, cultural institutions, sports associations, media, health care institutions, as well as a large number of distinguished guests from the cultural, political, business, academic and public life in Serbia. 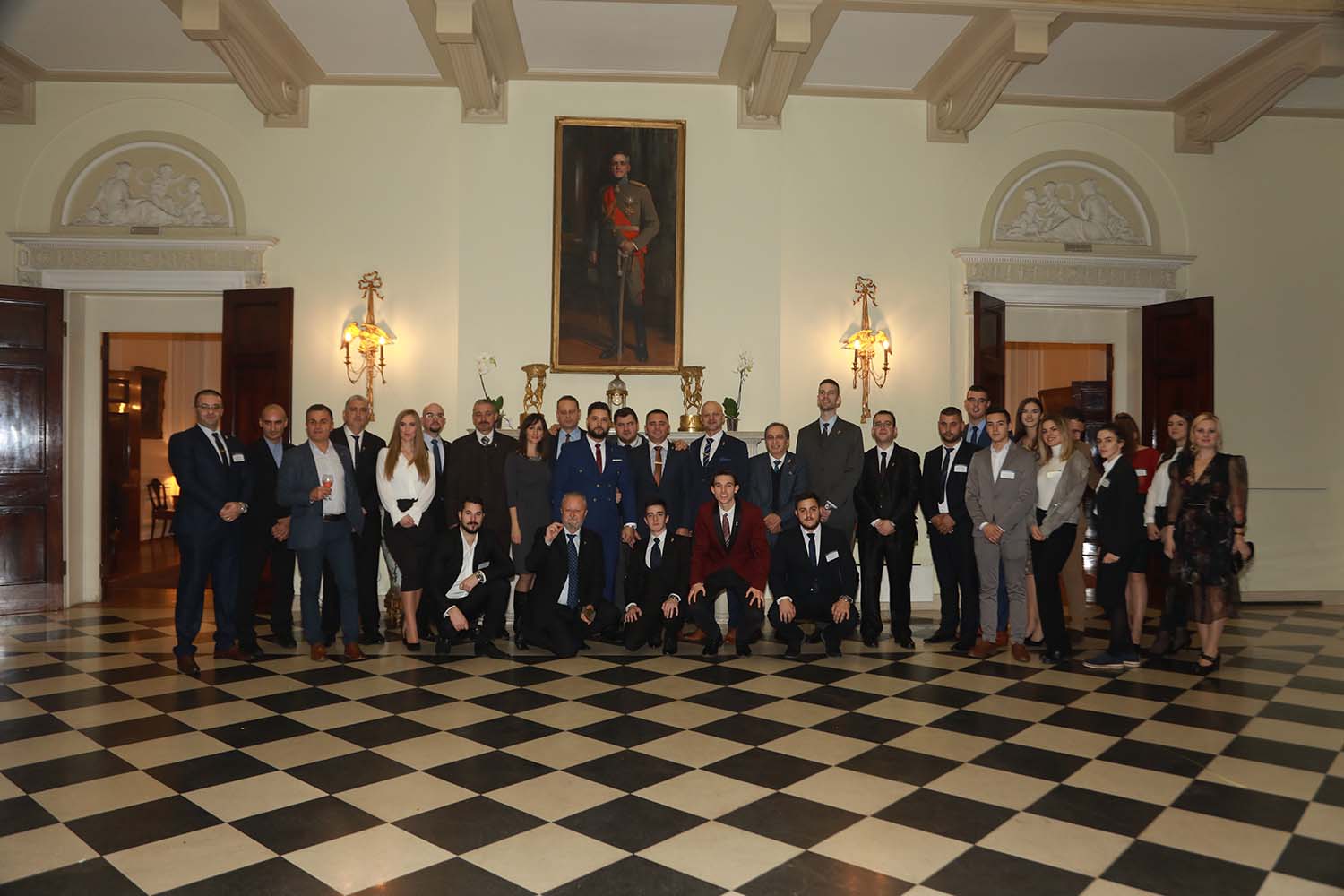