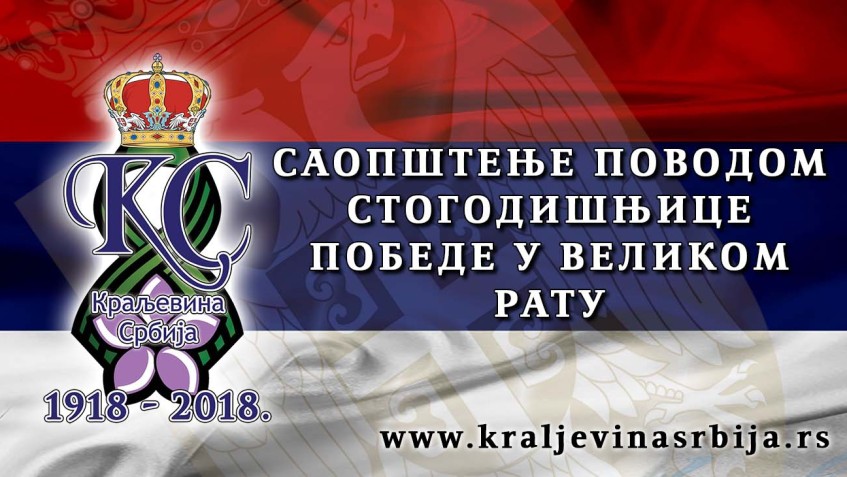 Time behind us indicate the period in which our nation can not be proud of the attitude towards the sacrifice of our ancestors for freedom in the World War I. We can not be proud of attitude towards the Supreme Commander, HM Knight King  Alexander I, who is most deserving for opening a new front line in Europe, raising the morale of the army and occupying a position that will lead to the liberation of the entire homeland, and make the secondary front line decisive for the outcome of the war.

Great powers, although they also had great sacrifices, wants us to remember the formal end of the war as the Day of the Armistice – as what would have happened if Serbian army did not break the front line, passed through the Gate of Liberty and snatched the future of the fatherland from their hands. The suffering and the grips of the Serbian people and the state, the victim that was given, do not give us the right to call outcome any other name but Victory.

By paying tribute to our glorious and victorious great-grandfathers and their leaders, laying the wreath of victory and martyrdom, we restore the respect they deserved in the eyes of the whole world, and we are bringing back from the oblivion their sacrifice that some in our past have deliberately pushed there and made us today be ashamed of our own mistakes and made us live indecent in their eyes.

We pay tribute to our brave mothers, grandmothers, children who lived in terrible conditions of occupation, repression, sickness, hunger, misery and survived believing and expecting the winners on their doorsteps every day.

At the Serbian military cemetery in Thessaloniki, it says:

“Blessed are the offspring who mourn for them,

For they were pride of their fathers,

Bless them also, for they have famously fallen,

For the Fatherland, King and Freedom”

Let us remember these words, on this 100th anniversary of the Victory, and try, striving and nurturing the ideals they cultivated, to correct what we have become and to make our lives worthy of their sacrifice and their example, to live by it in peace, and all of us to repeat on this day something that was written on Mackov kamen battlefield memorial:

“The fairies will compete in centuries to come, to make them veils worthy of wearing”.

The eternal glory to heroes and their Knight King!