STATEMENT – Resignation of the President of the Kingdom of Serbia Association 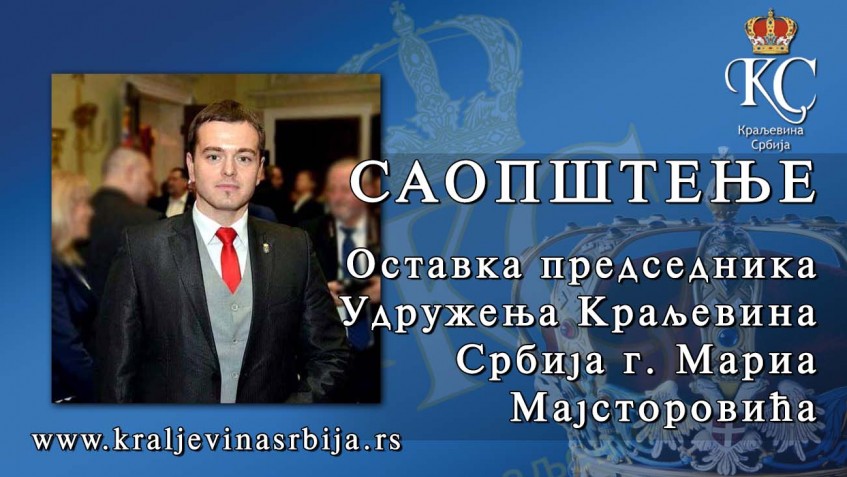 We inform all members of the Kingdom of Serbia Association that Mr. Mario Majstorovic resigned as President of the Association.

The Managing Board made the decision, which was confirmed by our patron, HRH Crown Prince Alexander, that Mr. Sasa Susic, Vice President of the Association, becomes Acting duty President until the organization of the Electoral Assembly.

On behalf of all the members of the Association, we thank Mr. Majstorovic on the dedicated work since the founding of the Kingdom of Serbia Association until today, without him the Association would not be what it is now!

Here is a statement from Mr. Majstorovic:

Resignation as President of the Association

After successfully carrying out the most extensive humanitarian activity and implementation of the tenth visit to Kosovo and Metohija, it was time to give place and duty to others and to give them opportunity to lead the Kingdom of Serbia.

In this regard, in accordance with Article 36, paragraph 2 of the Statute of the Kingdoms of Serbia Association, I gave my resignation to the Managing Board of the Association and informed the patron, HRH Crown Prince Alexander of the same.

After 11 years of active work in the Association, participating in its development and in all activities at the national level, occupying the highest positions, starting in June 2009 as the first President of the Executive Board, which I served for three terms, then as a member of the Managing Board, after I have been elected President of the Association four times, I believe that I have done enough and that the time is right to give other people the opportunity to accept these responsibilities. These facts, as well as private reasons, led to this decision of mine.

I am grateful to the Patron of the Association and the Royal House for their understanding, support and confidence, that have been crucial in many difficult times, as well as members of the Crown advisory bodies whose advice, assistance and encouragement were additional motives for me to move on.

When I look back at the work of the organization, I remain proud of setting up and developing a network of committees and trustees, striking the foundation for how they work, rules and function; building a recognizable image, model of action as well as further strengthening the relationship of interdependence and trust between the Association and the Royal Palace; participation in the organization of historical events – the transfer of the remains of members of the Royal Family and burial in Oplenac, participation in the organization of Royal weddings and baptisms; establishing and establishing cooperation with the Office for Kosovo and Metohija, which has implemented a large number of actions to assist our people and monasteries in the southern Serbian province;

The Order of Saint Sava of the Second Degree that honored the Association at its First Congress in Vrnjacka Banja, the largest gathering of monarchists after 70 years unrelated to political parties; networking with monarchist organizations in the region and creating joint events as well as launching the idea of ​​uniting monarchists in the region in a concerted effort to restore the monarchy as a foundation and guarantee of a more lasting peace, called “Balkan Scandinavia”.

I remain committed to the values ​​and the path of restoration of the monarchy that is in the essence of the Association and will be there to provide advice and experience in organizing all major events, and especially the completion of the “Walk of Remembrance” project in Marseille dedicated to the 85th anniversary of the death of HM King Alexander, which I started as President.

To those who come after me, I want them to be much more successful and never stop moving forward, raise their standards of work, and always strive for bigger goals!

How we work, so God help us!