Kingdom of Serbia Association – 7 years in His Majesty’s service 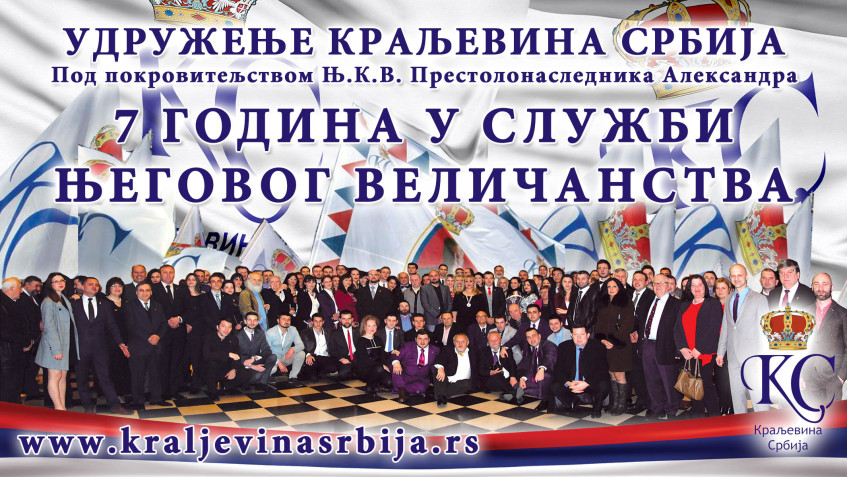 Today, on January 15th 2017, Kingdom of Serbia Association celebrates a small jubilee – 7 years of work under the patronage of HRH Crown Prince Alexander with only one crucial goal – the restoration of constitutional parliamentary monarchy in Serbia! On January 15th, 2010 the organization of the young people – King’s Youth became greater organization, open for all people –the Kingdom of Serbia Association

We have done a lot in these 7 years behind us, but great and important work still lies ahead of us! Work that we have to finish, for the well-being of our country and all of us!

To all members of the Association we wish happy anniversary! We will crown Serbia together!

The Kingdom of Serbia Association (KS) was founded by a group of Belgrade University students in 2008 and was first called King’s Youth. The association was established as a non-profit, non-governmental and non-party organization, under the patronage of HRH Crown Prince Alexander, with the ultimate goal of restoring Constitutional Monarchy in Serbia.

This group of young people, convinced that the restoration of constitutional monarchy can help Serbia, has managed with their positive activities to encourage both the younger and the older population to join them.

Because of the wish of a large number of people older than 26 years to join us, since January 2010 King’s Youth as a brand continued to operate as a youth section of the greater organization – Kingdom of Serbia Association. From then, the Association is open for everybody, there are no age restrictions. Membership grows every day, and currently the Association has over 18,000 members, who are mostly under 35 year old, organized into more than 80 Boards and Trustees throughout Serbia.

WHAT DO WE WANT TO DO?

According to the latest public opinion research, 39.7% of Serbian citizens support the restoration of constitutional parliamentary monarchy, which makes this option leading in our society, and that is without any public media campaign.

With this kind of support, the Association is using only positive activities, not acknowledging the violent and undemocratic methods. Purely with positive campaign, promotional activities and charity work, we are promoting the idea of constitutional parliamentary monarchy as the goal to which we aspire.

Continuous work on the building the infrastructure of the Association, setting up new committees and strengthening its existing, both in terms of organization and the number of members will make strong network of the Association, made ​​up of strong local boards which will be able to realize major campaign for the return of constitutional parliamentary monarchy. By gathering the largest number of supporters of this idea in the Association, we want to create conditions in which we will collect the largest possible number of the signatures of citizens’ support for the People’s initiative for the change of the Constitution of the Republic of Serbia into the Constitution of the Kingdom of Serbia. With these signatures we will in the highest legislative body of our country start a legal procedure for re-establishing a parliamentary monarchy in Serbia.

According to the existing Law on Referendum and People’s Initiative, proponent of the initiative after its filing has the right to address the members of the Parliament and present the proposal in the National Assembly. The creation of a monarchist caucus will be initiated in the Assembly, which will be joined by all monarchists inclined Members of Parliament regardless of their party association, who will support the initiative.

As well as the Crown, which is above all political and other divisions in one society, the Kingdom of Serbia Association as a promoter of Constitutional Monarchy gathers all people, regardless of their political, ethnic or religious affiliation. We think that this is the only way that will make the future of our country better!