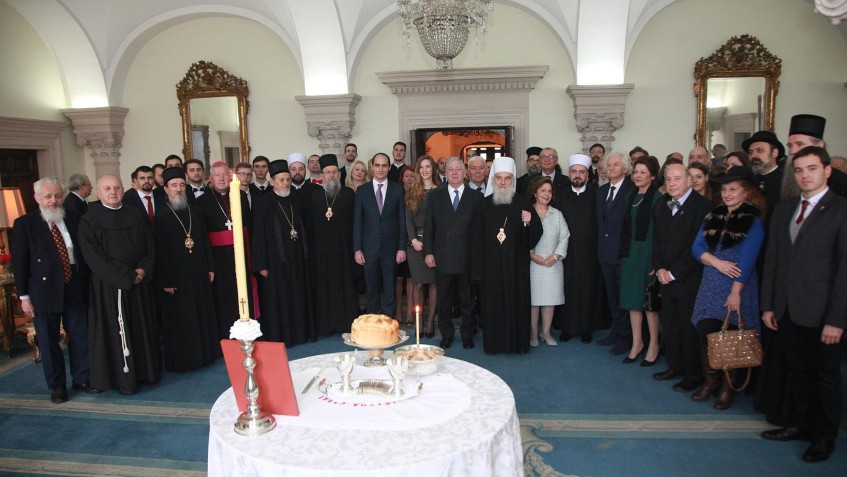 The Royal Family of Serbia celebrated its Patron Saint’s Day – St. Andrew the First Called, at the Royal Palace in Belgrade on December 13th, 2017. President of the Kingdom of Serbia Associatiion, Mr. Mario Majstorovic, was guest at the festive lunch, and members of the Association assisted the Royal Palace office in organization and realization of the reception.

President of the Municipal Committee of Stara Pazova, Mr. Sasa Reljić, presented the gift to HRH Crown Prince Alexander – woodcut logo of the Kingdom of Serbia Association, made by Mr. Dragan Minića.

The hosts were Their Royal Highnesses Crown Prince Alexander and Crown Princess Katherine, and the celebration was attended by religious leaders, members of the Advisory Bodies of the Crown, as well as by the friends of the Royal Family.

His Holiness Irinej the Serbian Patriarch officiated the Holy Liturgy in the Royal Chapel dedicated to St. Andrew the First Called, together with the clergy of the Belgrade – Karlovac Diocese. After the liturgy, the act of cutting the “Slava” cake in the Blue Salon of the Royal Palace was also performed by His Holiness Irinej the Serbian Patriarch.

“His Holiness Patriarch Irinej this year, too, has done us the honour by officiating at the Royal Chapel on the day when we celebrate Apostle Andrew the First Called. We are grateful to him for that, and to all of you because you joined us at the Slava dining table. We Serbs have for centuries been joined by celebrating family patron saints, as people, as a community with our patron saint name. Today, too, we need these celebrations just as we have always needed them. It seems as if every year we make the diary of what had happened, and what we are hoping for in the year ahead of us. This year we were especially happy because of the wedding of Prince Philip and Princess Danica. This year some things brought us sadness, too. The last among them is the passing away of our dear relative, King Michael of Romania, may god give eternal memory and peace to his soul. Our people is going to need faith, patience and wisdom. Faith – to give us strength, patience – to resist weaknesses in ourselves, and wisdom – not to betray our fate”, said HRH Crown Prince Alexander.