The medals of the Crown for Mirjana and Ljubomir Radojlovic 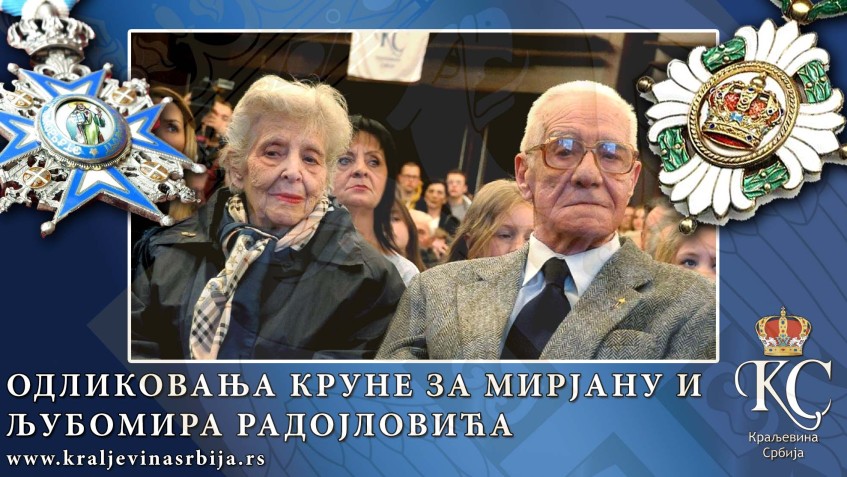 Kingdom of Serbia Association proudly informs you that our patron HRH Crown Prince Alexander, on the proposal of the Managing Board of the Association, decided to appoint the 2nd rank medal of the Crown to Mr. Ljubomir Radojlović, a member of the Managing Board, and the 2nd rank medal of Saint Sava to Mrs. Mirjana Čanić-Radojlović, a member of the Council of the Association, for their merit for the Royal House, the national and the common good and for all life’s work. Both medals will be proclaimed on Sretenje, February 15th, 2018.

Kingdom of Serbia Association sends our most sincerely congratulations to our dear Ljuba and Mirjana on this deserved admission!

Loyalty to the Crown and House Karadjordjevic, the Radojlovic family shows almost two centuries. Data on the oldest ancestors of this family are worthy of great respect. From the time before the First Serbian Uprising, Radojlo Vukotić was in close relations and cooperation  with Karadjordje. During the Uprising, Radojlo Vukotić, after whose name Radoјlović family got last name, was in charge of digging ore on Rudnik Mountain and transporting and selling it to Austria, in order to take money and buy arms for Uprising army.

Captain Petar (Radojla) Radojlovic, was adopted by Stamenka Carapic (born Karadjordjevic), the youngest daughter of Karadjordje, after the death of Radojlo Vukotic, and the son of vojvoda Vasa Carapic, Ilija Carapic, the first Belgrade Mayor. The family Radojlović inherited all items of the vojvoda Ilija Čarapić, such as his seal ring and others. Duke Ilija Carapic and Stamenka Carapic were buried in their family grave at the New Cemetery in Belgrade. Petar Radojlovic is also known for the fact that, after the departure of the Turks in 1862. from Soko grad fort, he destroyed the Fort.

Ljubomir (Petra) Radojlovic was a friend of HM King Alexander I and the famous vojvoda Zivojin Misic. Among other things, he speaks of the vojvoda Mišić in his memories, with great gratitude, for at the time of his first retirement, Ljubomir helped him organize family life by borrowing him more funds for building a house in Deligradska Street.

His son, General Lieutenant Colonel of the Yugoslav Royal Army Milos Lj. Radojlovic participated in the Second World War, in the position of Commander of Banat and the Yugoslav-Army Corps of the Yugoslav Royal Army in the Fatherland and the Supreme Command in the Šumadija group of the Corps, and at the very end of the war he was appointed Commander of all the Šumadija troops. After the war, he was first sentenced to death, and then fifteen years in prison. He spent 10 years in jail. Lieutenant Colonel Miloš Lj. Radojlovic, was married to Smiljana Banic, with whom she has a son Ljubomir Radojlovic, our friend and benefactor.

Mrs. Mirjana Čanić-Radojlović, wife of Ljubomir, is granddaugther of the army general Stevan Hadžić, the Minister of the Army, Navy and Air Force of the Kingdom of Yugoslavia in four terms. Interesting is the fact that General Hadzic, in the capacity of the first ajutant of the HM King Alexander I, attended the childbirth of HM Queen Mary, during the birth of HM King Peter II, on September 6, 1923.

Following footsteps of their ancestors, Mrs Mirjana Čanić-Radojlović and Mr. Ljubomir Radojlović, although in the 9th decade of their lives, today unreservedly show loyalty and sacrifice with the noble tendencies to restore monarchy, an indefatigable loyalty to the Royal House, and in addition to all life’s horrors that are survived during the period of the communist regime, from taking off all property whose value is estimated at several tens of millions of euros to long-standing confinement in prisons and all kinds of personal humiliations. We also draw attention to the fact that Mr. Ljubomir Radojlovic is one of the most deserving individuals for judicial rehabilitation of the general Dragoljub Mihailovic, bearing in mind his commitment for 25 years as a member, and then also the Secretary General of the Association of the Yugoslav Army in the Fatherland from 1941-1945. Belgrad. Ms. Mirjana devoted her life to the restitution and the restoration of the illegally seized property of citizens after the communist regime came to power.

The Radojlovic family is the biggest benefactor of the Kingdom of Serbia Association, they have given large and representative premises in the center of Belgrade in Vlajkoviceva street for free use for the needs of the headquarters of our Association, which we have been using for three years.